Delayed Birth Certificates are such a gift to genealogists.   They were created for many different reasons, but our ancestors especially needed them during the late 1930’s and early 1940’s when registering for Social Security, which required proof of birth. These documents can provide us with information which we might not be able to learn from any other source.

I love this photograph of the seven sons of my great-great grandparents, James Furlong and Mary Ball.  The couple emigrated independently from Wales, settled in Maryland where they married and had their first two children, and then they migrated to Washington County, Pennsylvania between 1864 and 1866, most likely after the end of the Civil War in 1865.

The seven sons were all born in Coal Bluff, Union Township, Washington County, Pennsylvania, between 1866 and 1885.  They were all coal miners, beginning at a very young age.  We think the photograph was taken in about 1904.  My great-grandfather is James William Furlong, on the bottom right of the photo.  I like his attitude, with the little tilt of his head and the slight smile on his face!

It’s possible that all of these men might have needed to file a delayed birth certificate, since they were all born prior to the time when births were registered by the County (1893), and it’s very likely they all would have wanted to register for Social Security.  So I went to the Washington County Courthouse in Washington, Pennsylvania, to find out.

The Washington County courthouse is nothing short of magnificent.  It was built in 1900, and is still in operation today.  I absolutely love doing research there, especially because I can imagine my ancestors visiting the building and seeing the same structure as I do.

The vital records are in the Register of Wills office.  The counties in Pennsylvania kept records of birth and death from 1893 – 1906; after that, they were recorded at the State level.  Marriages were recorded beginning in 1885, and continue to the present.  In fact, when I was there this week, I saw several young couples come in to obtain a marriage license, much like young couples would have done 100 years ago.

The office has an index to the Delayed Births.  It’s the original handwritten index in the old style over-sized ledger book.  It’s organized loosely alphabetically, with each letter in its own section, but it’s not alphabetized within the letter section. I went directly to the F section, for Furlong.  I found three of the seven brothers listed in the index: John, Thomas, and Frederick.

One of the clerks then led me to a basement vault where the original certificates are housed.  It was literally a vault, with a big heavy thick door.  The clerk found the books I needed, directed me to a little desk in the vault, and told me I could take photographs of the documents.  She then left me alone to my work. 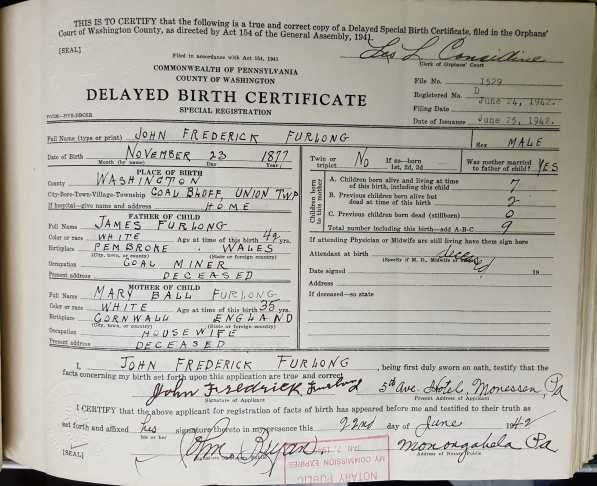 Look at the information on this document!  Not only does John name his parents, but he provides very specific locations of their birthplaces in the old country.  He also provides the ages of his parents when he was born, how many other children they had had at the time, and how many had died.  There’s also his original signature, and his current address.

I don’t know how the County handled registration of births that occurred elsewhere, either in another county, another state, or even another country.  But, as we all know, where there are rules, there are always exceptions, and it’s worth checking.  One of the seven brothers lived in Allegheny County, so I’ll look for his Delayed Birth Certificate there, just in case they allowed it.

Even though I already knew most of the information on the certificates I found, it’s important to have as much evidence from as many different sources as possible.  It’s great to have confirmation of what I’ve previously concluded.  And, if I had checked for these certificates earlier, the search for my ancestors’ origins in the old country might have been easier!

P.S.:  Just a note for anyone who might be reading this who’s interested in the Furlong family:  James and Mary Furlong had three daughters as well.  Sarah Furlong Crockett died at age 36 in 1899 of typhoid fever, but I did search the Delayed Birth Records Index for Mary Ann Furlong Walker and Martha Furlong Payne Castor, with no luck.